Poole in 1568 began to develop in its importance, Queen Elizabeth 1st’ “Great Charter” made it one of only 16 ports in the country to be directly responsible for its maritime interests. Across the succeeding 150 years it grew in importance with the development of its fishing interest in Newfoundland, and through developing trade with the Communities and colonies on the east Coast of America and in the Caribbean.

The period of the project is defined by the lifetimes of our three leading men – Button at the beginning of the period; Bennett and Rogers towards the end. These are the people that we believe some of the alleys on Poole Quay might have been named after in the C18t
Sir Thomas Button was an Admiral working for the Crown; Bennett was a Royal Naval Captain and probably involved as well, with his wider family, in local smuggling; and Rogers was a famous privateer who established the Bahamas as a colony on behalf of Kings George I and George II between 1717 and 1732.
These are our three leading men; we think their lives map onto the development of Poole in this period rather well. Their experiences certainly help to explain more about what was going on in those days …. What do you think?

Poole’s Maritime Heritage: Ways the three characters’ lives map onto it
In 1568 Elizabeth I granted her Great Charter to Poole recognising its growing importance nationally; as one of only 16 such places it became the Town and County of Poole, the nearest other one given this privilege being Southampton . This freed the Town and County from direction by Dorset and from any influence of the Lord of the Manor excepting some rights concerning the foreshore and the heath. The status of a County Corporate implied the establishment of a corporation and extended Poole’s existing powers. The Charter allowed the town through its Burgesses to choose its own Mayor, his brethren (Aldermen), Sheriff, Water Bailiff, Justices of the Peace, Recorder and Coroner. Another real advantage to the port was that Poole’s ships were henceforth exempted from docking dues at other English ports.

In 1577 Elizabeth I was concerned about French and Spanish pirates in the Channel and locally there had been concern too. The Privy Council wrote to the Mayor of Poole concerning the perceived invasion threat. Harbour Commissioners were tasked with apprehending pirates in their waters and to name suspect vessels and those who had fitted them out in a warlike manner without her majesties “special licence” (the distinction between a privateer and a pirate over the previous five years). Some 43 ships were captured off the Dorset coast by two Royal Navy warships in 1583: Francis Rogers of Poole, brother of the High Sherriff of Dorset, Sir Richard Rogers, had been named a pirate and several pirates had been hanged on Studland beach.

Nowhere in Poole then was far away from the Quay and its activities. Poole town mainly occupied only the “island”, protected on the northeastern side by the big ditch and the town gate and elsewhere by the water of the harbour, the back water channel and Holes Bay. People living here would have known well what was happening from day to day in the port and on the quaysides.

Close up of Bankes Map showing Towngate, near where Hunger Hill is today – note the water in the image either side of the gate

The town was dominated by maritime activities and business in support of those – imagine the loading and unloading of vessels, the many horses and carts, the storage of goods in warehouses, the markets for selling goods to local people, the shipyards where boats were maintained and built, the hub-bub of the port itself and the pubs and hostelries on the back streets where life went on.

As the older harbour-side buildings in Poole testify today, warehouses abounded and there were also breweries, chandlers, rope-makers, sailmakers, public houses, hostelries and coaching inns, stables and places for people to sleep and eat. The promontory also contained several areas of land that were given over to producing food for people and for animals to graze, as well as St James Church and its graveyard. All these things were in support of the main activities which comprised fishing, merchant venturing, trading with new colonies and the middle-east, local sea trade with France and Spain/ Portugal and short sea shipping along the south coast.

Poole in those days already had links to Newfoundland for fishing and the annual run drew fishing vessels and people from the town and surrounding areas; out in April/ May and back in October. Local families shared ownership of vessels and ran trading concerns as well as fulfilling demand for fish locally. In the late Elizabethan period particularly it was an economic necessity that people took up the option of the Newfoundland run in order to earn more than a living on the land in the surrounding areas of Dorset and Hampshire would provide. The Poor Law was enacted in 1601 when 50 people were said to rely on the town for sustenance. 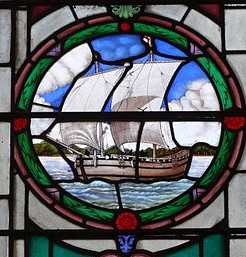 Thomas Button went to Newfoundland from Bristol in command of two ships to search for the Northwest Passage in 1612, and surveyed parts of the North American coast-line. He returned in 1613 and received his knighthood in Dublin in 1616 for his efforts. His vessels the Resolution and the Discovery had as part of their crew sailors who a year earlier had been with Henry Hudson the explorer, before the mutiny that saw him cut adrift and disappear. Button had to abandon the Resolution that summer because it was crushed by the ice.

The Discovery is shown above in a stained glass window in St Sepulchre without Newgate in London; it is evidently a small boat and it is hard to believe today that it was used to explore those waters.

After the restoration, Bennett and Rogers lived in Poole; Bennett was born here and while Rogers lived here for many of his early years his birth is not in recorded evidence. In a 1690 Poole Poll Tax list, the Rogers family was living in Thames Street and consisted of Woods Rogers senior, Frances his wife, Woodes his son and another child. Captain Woods Rogers, his father, had by then developed a thriving shipping business in Poole trading with Newfoundland, before moving the family to Bristol around 1690

John Bennett’s family also left Poole at that time to return to roots in Essex. They lived out the remainder of their lives in Barking. John Bennett senior, his father, had also worked as a Royal Naval Captain while living in Poole.

Throughout most of the period of our project privateering was relied upon to help the state protect its waters and to bolster the Royal Navy. The logic of this was that privately owned ships licensed by the crown could legitimately take vessels that were deemed pirates (deemed so because the nations were at war with one another). Elizabeth I encouraged privateering during her reign, through the wars with the Spanish; there was little to distinguish the process from naval warfare. While James I and Charles I did not employ privateers, thereafter it arose again as a valid activity through the remainder of C17th and C18th; only reducing in intensity following the treaty of Utrecht in 1713 and ultimately only properly ceasing after the 1856 declaration of Paris.

Privateers received Letters of Marque from the crown when mounting expeditions and trading trips, licensing them to engage with any vessel from another nation at war with England and to capture the vessels, their crews and goods. Button in his early career served on privateering raids in the West Indies. Woodes Rogers when he set off from Bristol in 1708 on his round-the-world voyage did so as a privateer backed by many business acquaintances.